Hi  friends, this is Nagarjuna Hoovina from Bangalore, Karnataka. Now I am going to tell you about my experiences on the yoga retreat held in HOSAGADDE, SHIMOGA DISTRICT, KARNATAKA conducted by YOGAVIJNANA center (http://www.yogavijnana.in), Chandra layout, Bangalore.

On the 10th of august 2014, I received a mail from my brother about a yoga retreat camp to be held by YOGAVIJNANA center. He asked me whether I would like to join him. I went through the entire mail and its details. Of course, it was an interesting concept, but was it really my piece of cake? Being a complete newbie to yoga I had my doubts. The idea of travelling to a place without pollution, network coverage (which meant no phone calls, no Facebook, no whatsapp, no virtual connection with the world.) I was to visit a serene place with 0% disturbance,so I got back to my brother saying that I was all set to sail out with him.                     Finally, on the 14th of august 2014, I came to my brother’s house at noon, my brother got back from work in the evening.later our bags were packed, dinner gobbled down and adieu said to family by 10.30 p.m. As we reached the yoga center, my brother introduced me to Mr.Vinay.S, the yoga instructor and the other members Sudarshan, Prashanth, Usha, her husband Mahesh and their kid (Aditya), Swetha, my brother Madhukar (oh finally you get to know his name :P) and myself … We left center at 11.15 p.m and we took Tumkur highway route.
Next day morning (15th of august 2014) we reached Shimoga and passed through Sagara and from there we traveled for about 70 kms to reach the Paradise. As it was Western Ghats it took nearly two hours to reach. When we were two kms away from paradise, a person named JANARDHAN G.L; ENVIRONMENTALIST was waiting for our arrival. We reached the house at 8’o clock. 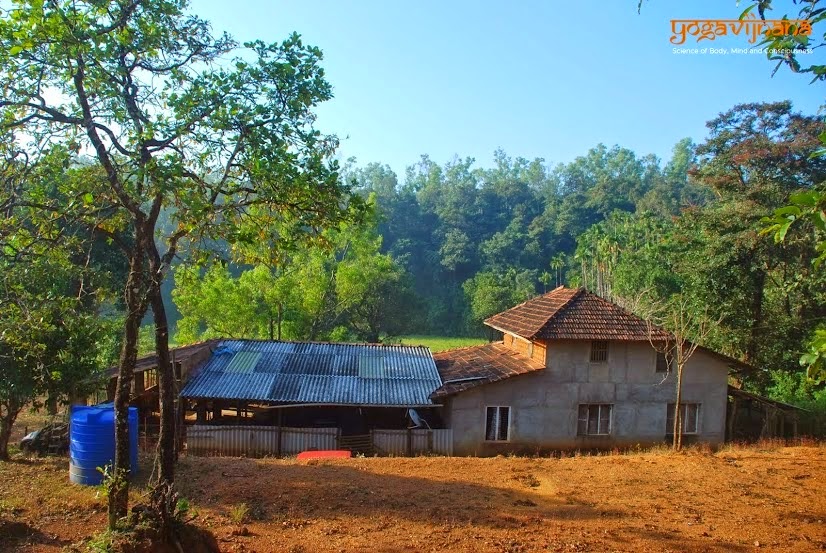 We were warmly welcomed by Chandrasekar Sir, Owner of the house. After getting freshened up, we had breakfast (food was too good) and we sat down for our Team Introduction where we introduced ourselves to others and we were awestruck to hear that both Janardhan sir and Chandrasekar sir have done many social service to people of shimoga and surrounding villages, later Introduction Workshop where Mr.Vinay explained us the purpose of this retreat and in detail of yoga, Orientation and Update on Schedule at 11.30 a.m and it went on till 1.20p.m and by then Lunch was ready so we had our lunch(In the menu they had made a sweet (payasa) mixed with jaggery and dal, it was too awesome to eat it).

So, our next program was warm up session at 2.30 p.m, for that we went for a walk into the forest for about 2kms (total 4kms both ways). It started raining, the whole atmosphere was amazing. As we marched inside the forest there were different types of flowers and a lot of leeches too on the way and to prevent them, chandrasekar sir had given us a tobacco stick dipped with limestone so when we keep it on the leech it will die. After travelling for 2kms there was a BACKWATER RIVER of Sharavathi running across and it was an amazing scenery.We clicked some photos and returned to the stay house at 4p.m. At first I was hesitant to speak out, because everyone was new to me but later on all were like my family members. 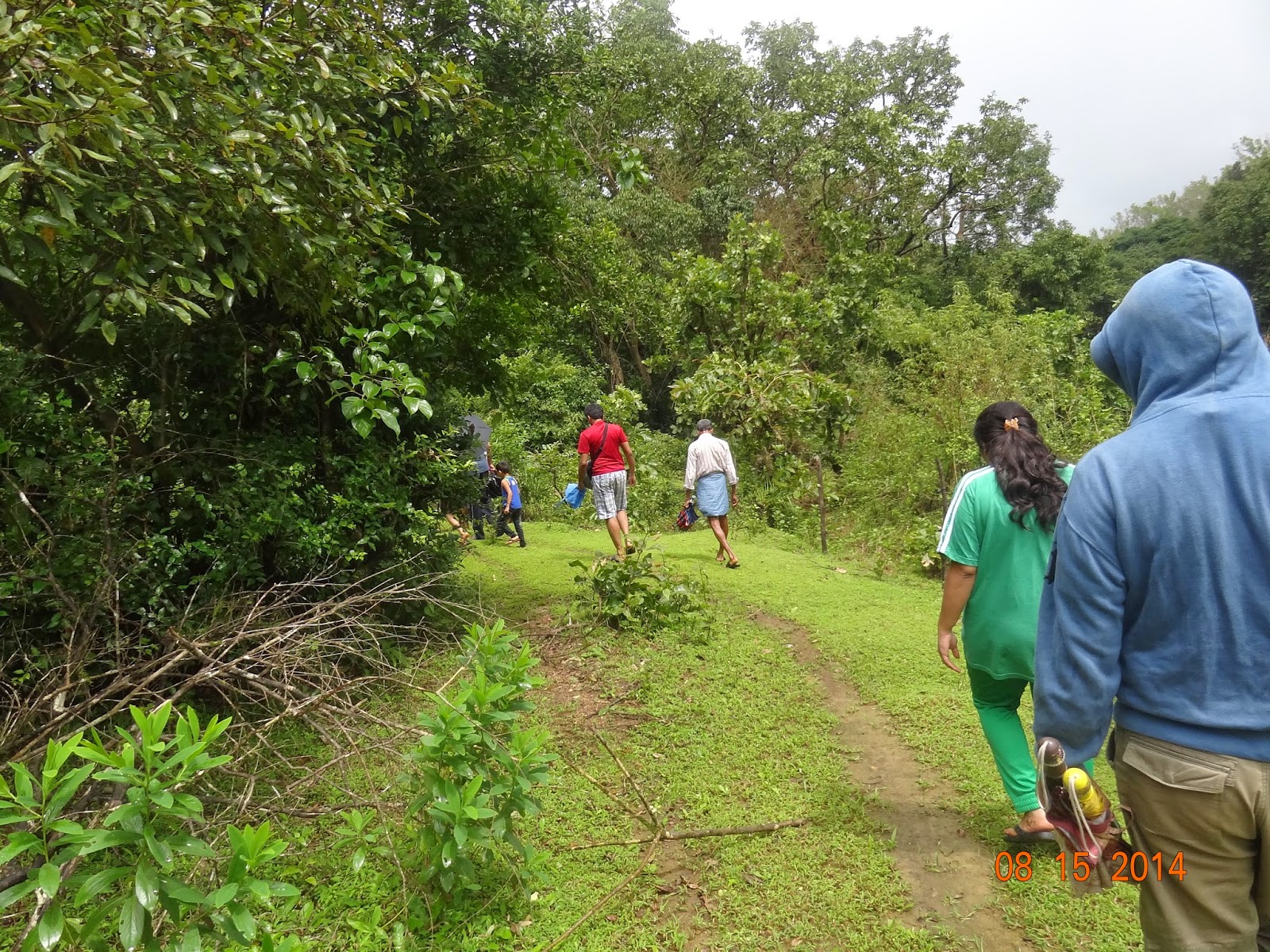 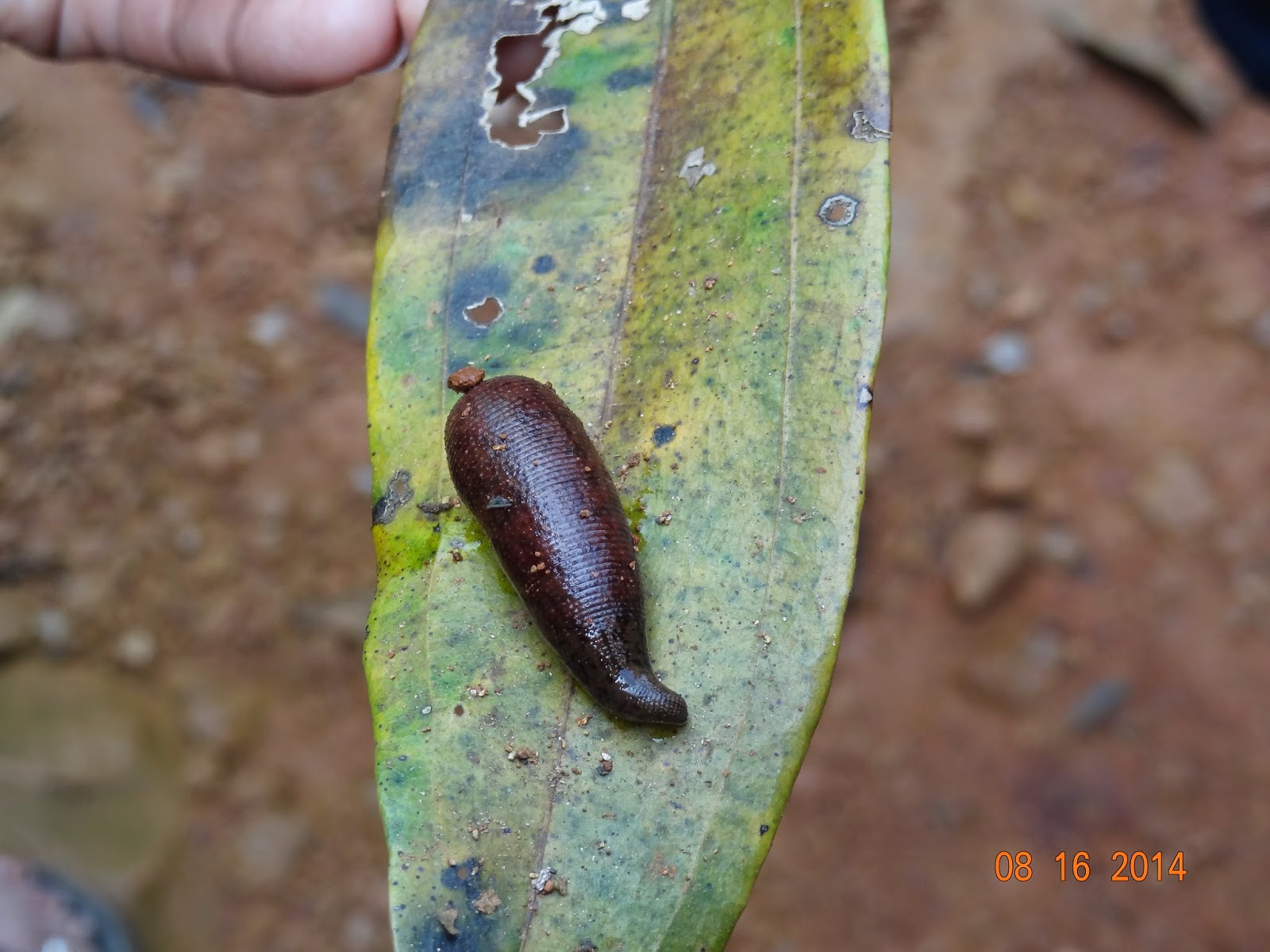 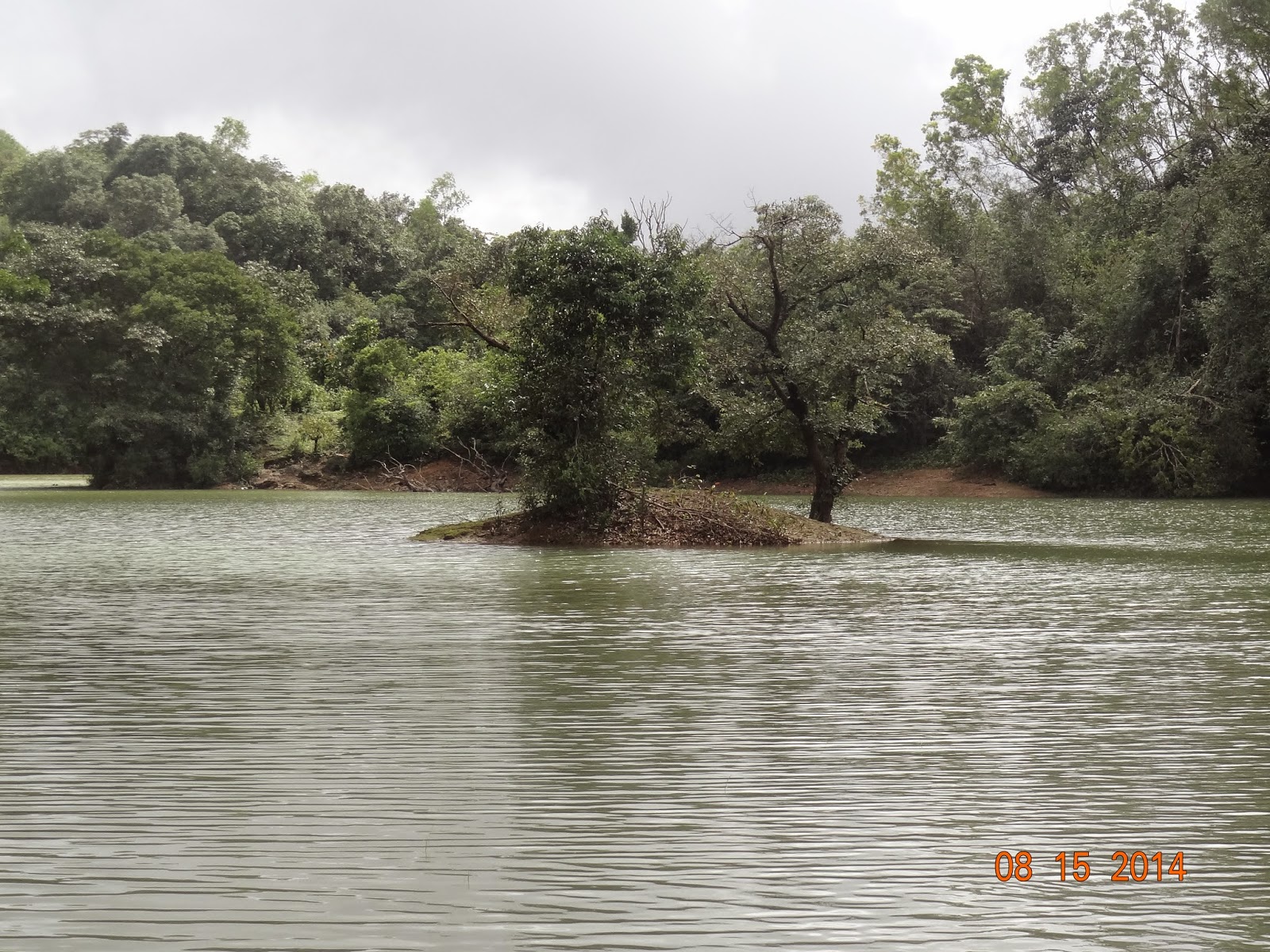 Our next program of the day was YOGA Session-1 at 4.30 p.m, at the start of the session; I was finding it tough to do yoga asanas as it was new to me. Later on it was quite easy and interesting and in this session we were made to feel our each part of our body and went on till 6.30p.m and next was Pranayama and Meditation session and this went on till 7.30p.m, at 8 p.m, dinner was ready, we had our dinner and after dinner we went for a small walk and on the way we found a unique plant which emits light in the dark and it was amazing to see it ,later at 10p.m we went to bed. 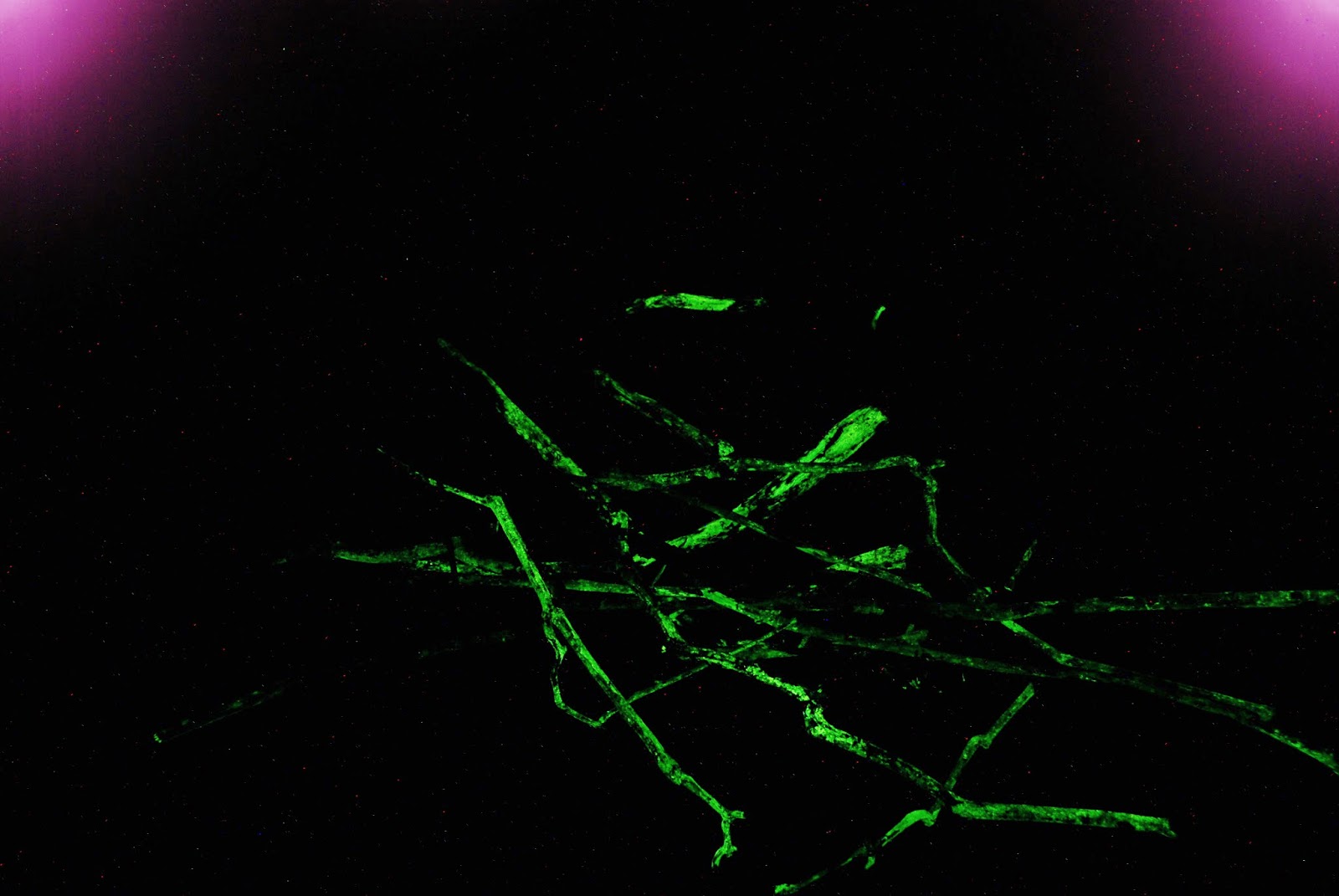 On 16th of august, 2014
We got up at 5 o'clock, freshened ourselves and Yoga Session - 2 started at 6.30 and went on till 9.00 a.m and we had our breakfast.Our next program was a SILENT TREK TO DABBE FALLS (4kms one way) but due to heavy downpour overnight and as it continued till morning, Janardhan sir told us that it will be risky to go there instead gave an alternative that there is a place called SRI BEEMESWARA TEMPLE, 15kms from the house and that is the best alternative for doing a silent trek. We started off our journey at 10.30 a.m in our vehicle and after 20 minutes we reached a spot from where we started our maiden Silent Trek towards the temple (At 1st I didn't like the silent trek, I told my brother that this silent trekking is boring and he briefed me about the purpose of the trek, then only I started enjoying, infact it turned out to be my BEST ever trek). After crossing around 200 meters, me, sudarshan and usha were behind and rest all were ahead. Suddenly I spotted a black colored thing in a zigzag way, I was wondering what this thing is? After looking at it for 5 sec I came to know that it’s a SNAKE!!! I didn't panic and slowly I called my brother and told him that there is a snake. He didn’t pay much attention to it and continued to walk. I slowly took out my camera and clicked pictures of it and I called Sudarshan and showed him the snake (he had DSLR Camera). He saw it and clicked pictures. I was wondering whether the snake is dead or alive. Sudarshan told me that the snake is basking in the sunlight and we moved ahead. After moving three steps, suddenly I turned backwards and was astonished to see that the snake had lifted its head and started shaking it. Believe it or not, it was the most thrilling moment of my life (a bit scared too). After trekking for one hour, we reached the temple and next to it there was a beautiful waterfalls running. Two eyes are not enough to see its beauty and water looking like milk. We all got down in the water and played for half an hour, clicked some photographs and we went to temple (as it was closing time). After returning from the temple again we got down in the water for another half an hour and then had our lunch and departed from the place. After travelling back for one km Aditya (6 year old kid) was about to step on a snake travelling from one corner to another. Suddenly my brother dragged him back. All were taken aback, myself and Sudarshan clicked pictures of it and we continued our walk silently. This was all about the FIRST EVER SILENT TREKKING done by me. We reached the house at 4.30p.m 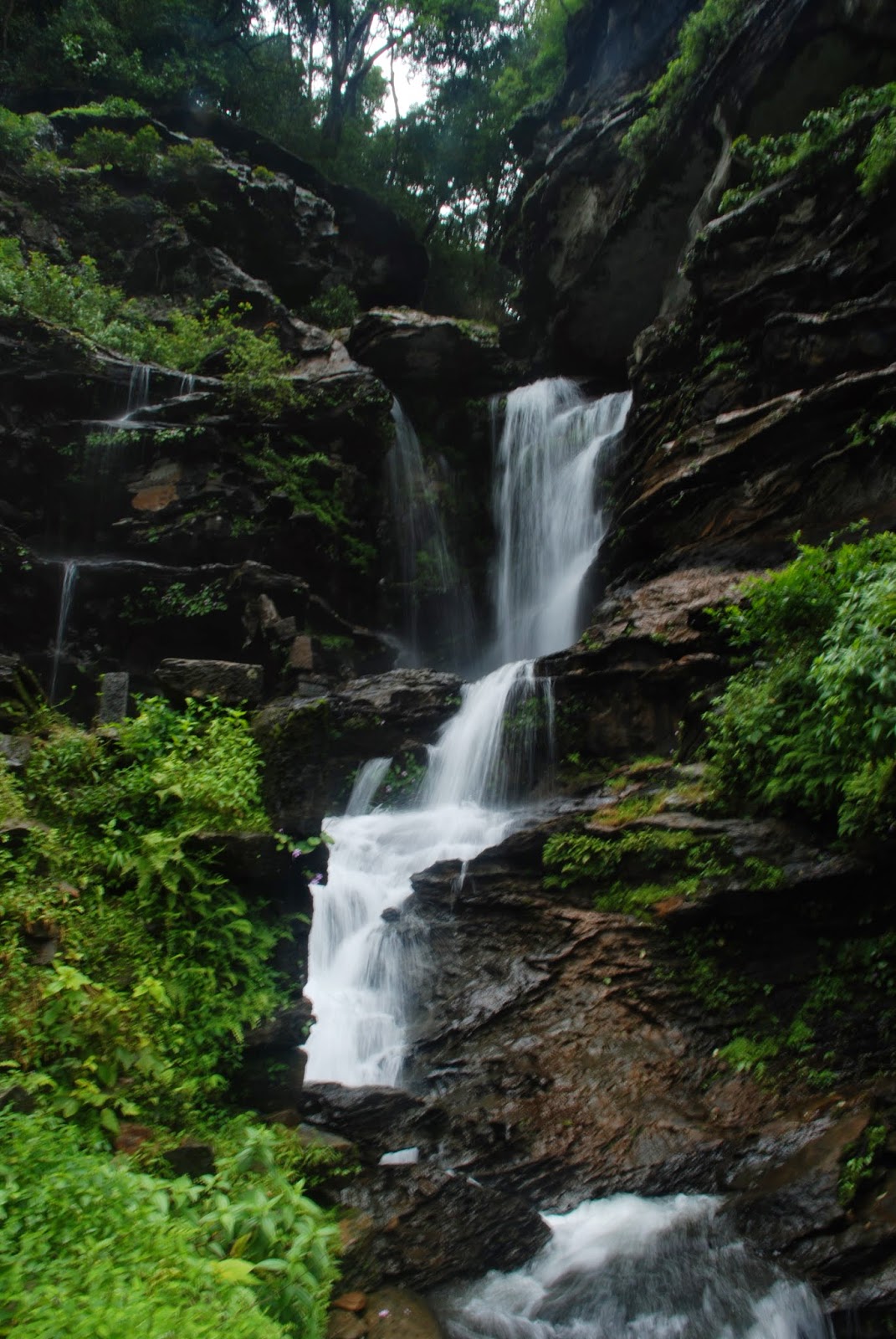 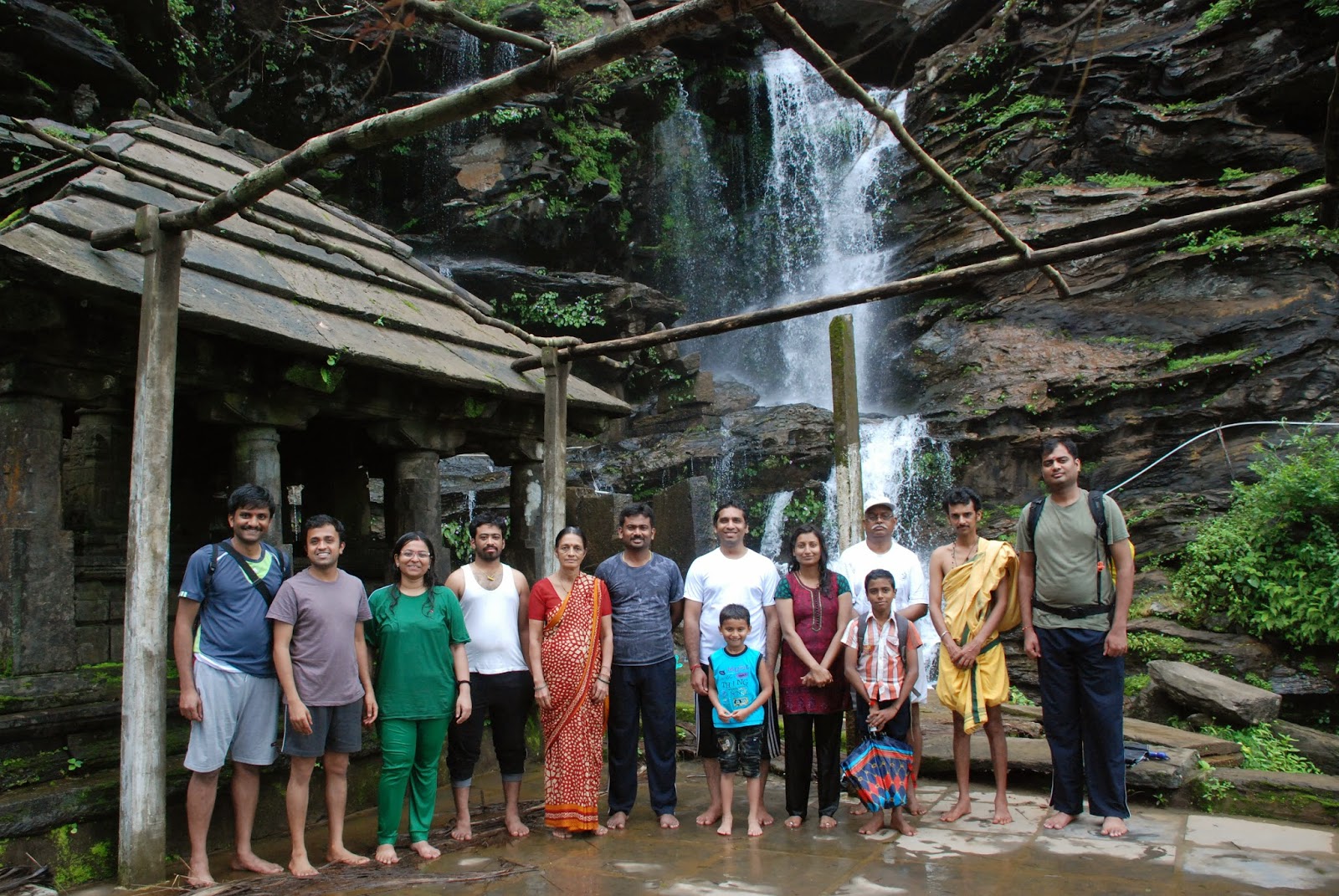 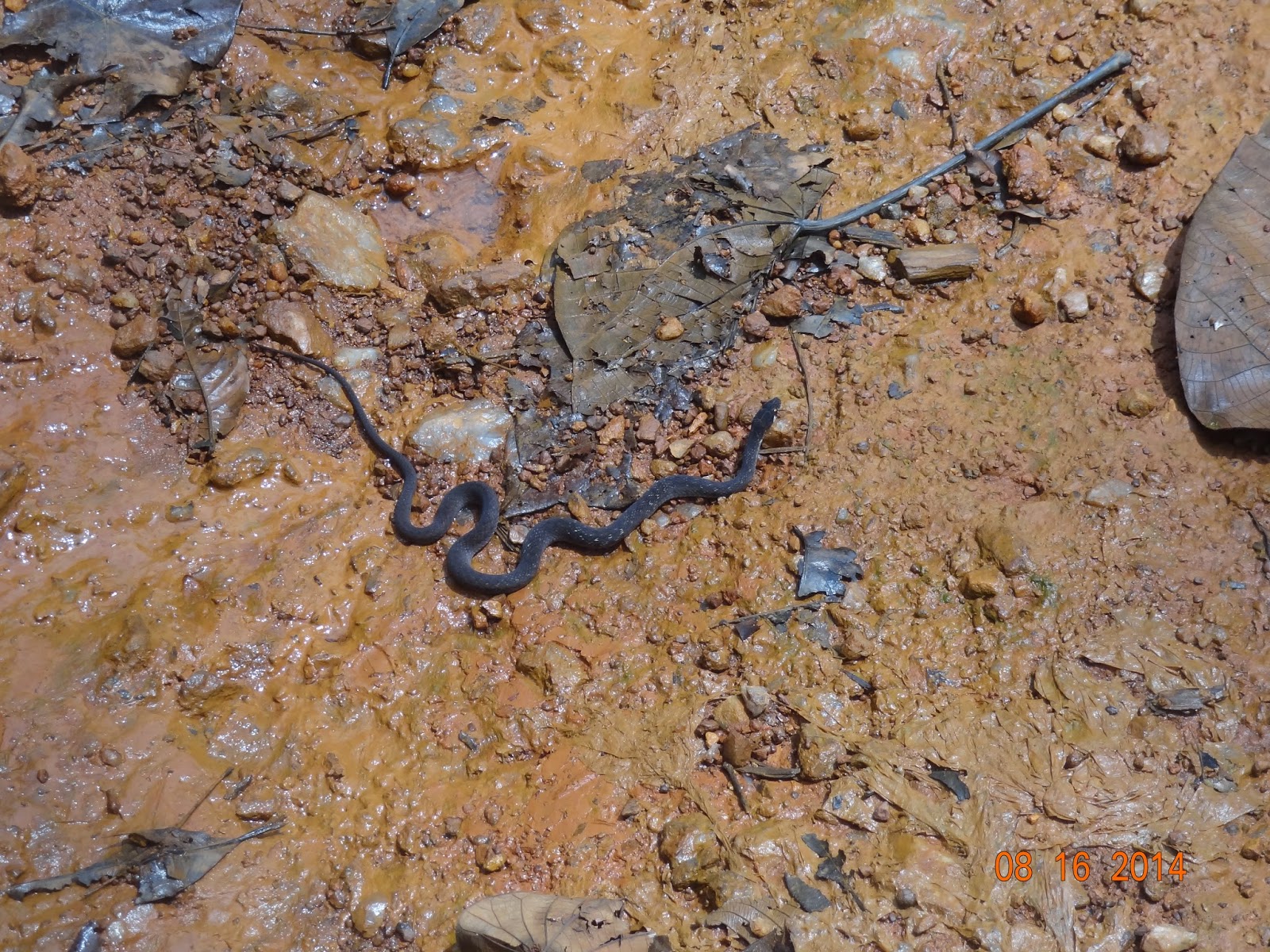 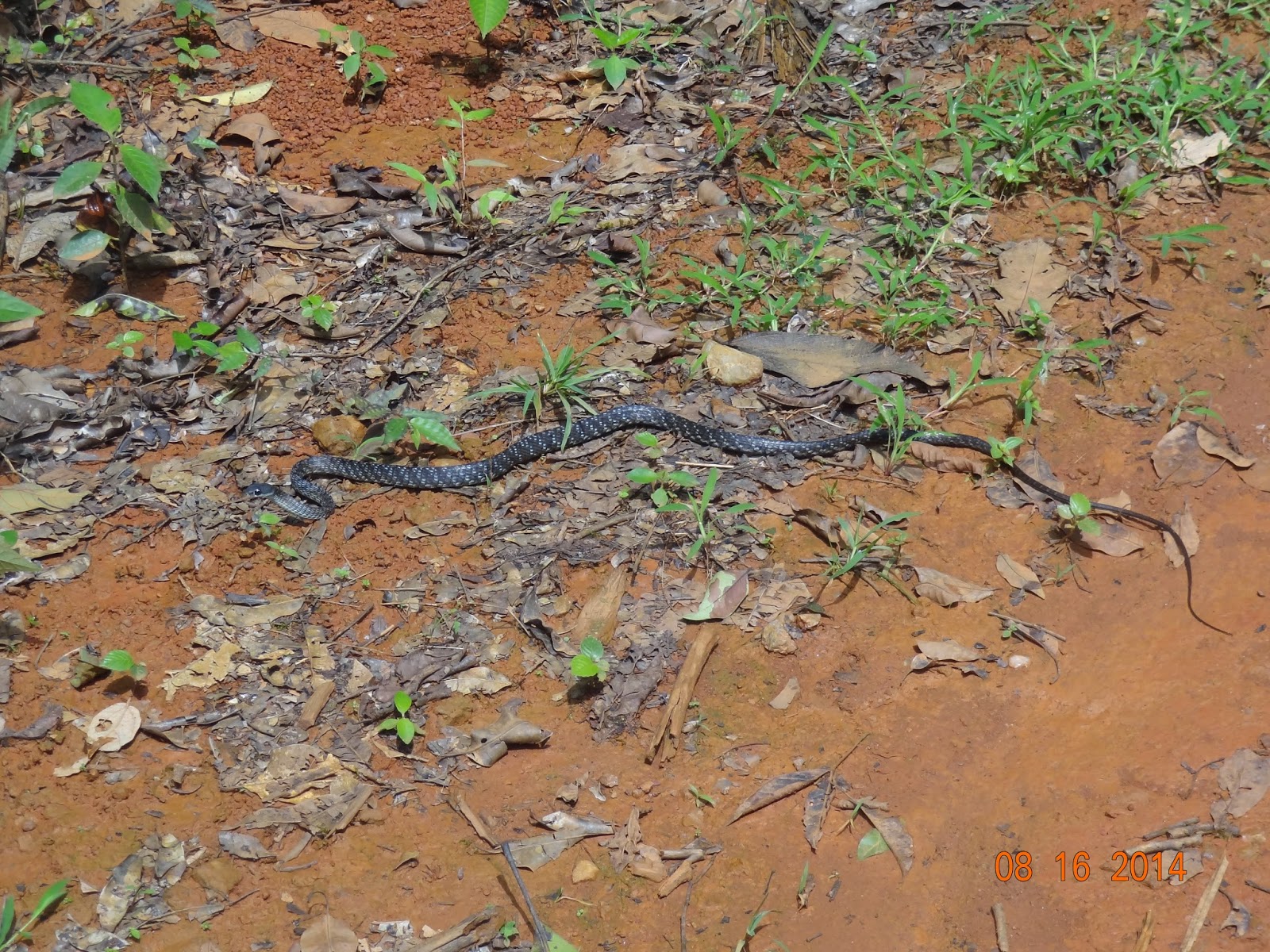 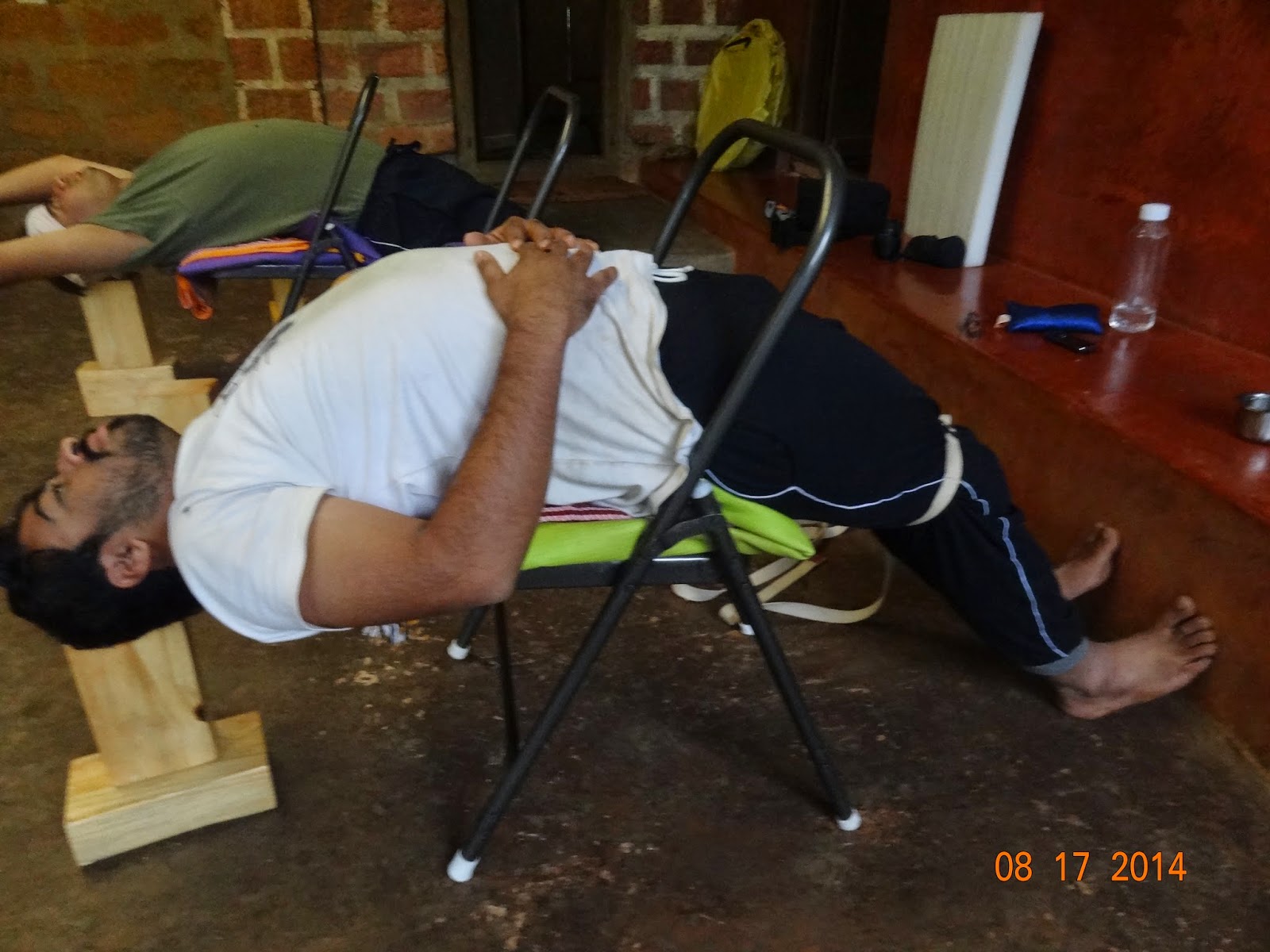 We left for working in the paddy field as a part of Karma Yoga. But scenario was entirely different there. Due to some reasons we had to cancel the program instead we started playing in paddy field (It was first time experience for all). We started with the running race, after that we started pushing others down to ground. It was an amazing experience playing in paddy field, we played for one hour and did photo session of ours drenched in quicksand.Then there was a small water stream flowing near by the paddy field, we went there and bathed (played) for half an hour and came back to the house, in the mean time it started raining. I always had a thought of drenching myself in the rain so straight away I stood under the rain water for five minutes, freshened myself and we had our lunch. 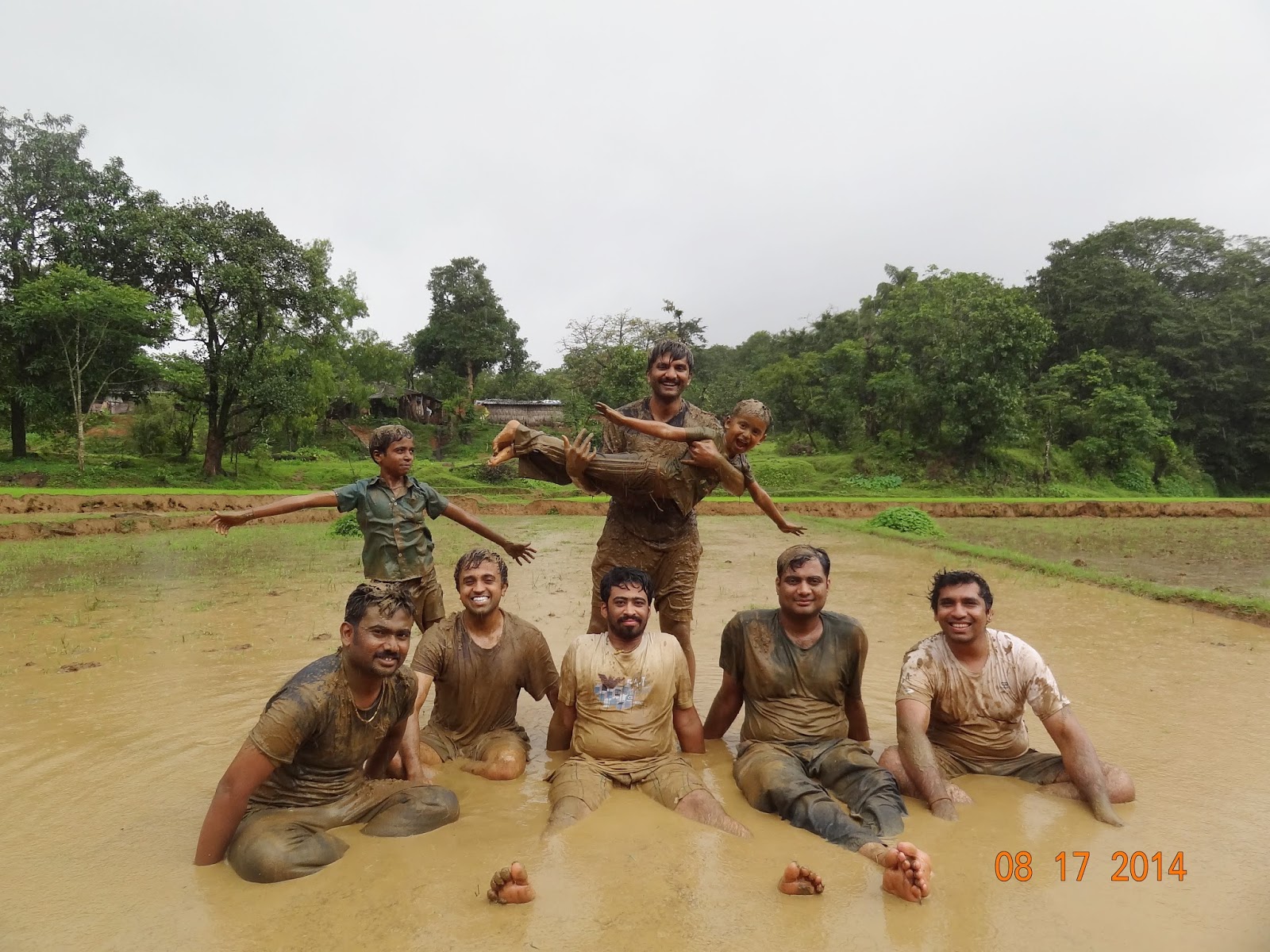 Later we sat for formal conclusion of our first maiden YOGA RETREAT and everybody started sharing their experiences including Janardhan sir, Chandrasekhar sir and their family members. I told them that in the past, i was never interested in doing yoga but now i have made up my mind to do yoga and concluded. Later our bags and yoga props were packed into the Tempo Traveller (TT) and we said a very ADIEU to them and left Hosagadde at 2.45 p.m. 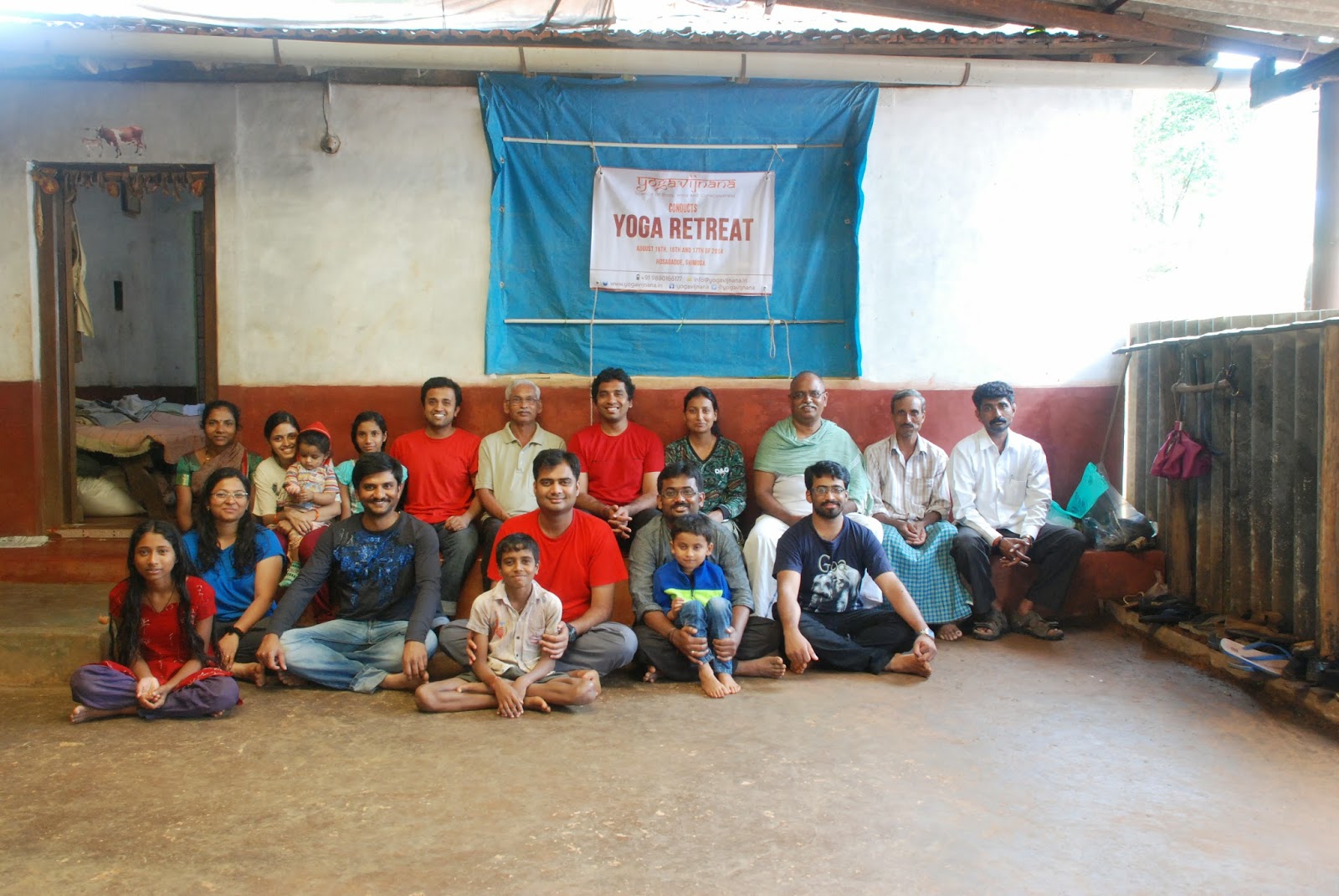 At 4.00p.m, we went to Varadahalli near Sagara; we went to Sri Sridhara Swami Ashram, this place is very calm, one can hear vedas and upanishads and the ashram has a goshala also. Next we went to Sri Durgamba Temple just 1.5kms for the ashram, this place is also very calm and Temple administration is developing this temple very well these days and we got darshana of Goddess Sri Durgamba and left Varadahalli at 5.30p.m. At 9.30 we stopped by a restaurant near kadur to have our dinner. We ordered the food and in while everybody were discussing about some topics, in between they started talking about my photographic skills so they asked me why don’t i start my career in Creative Photography and also they said that i have a good eye for angles of photography. They praised me for the skills I have got and then I told them I will think over it. We had our dinner and left the restaurant at 11 p.m.

We reached Bangalore at 3.00 a.m (18th of august 2014) and said a very ADIEU to all of them and returned to my brother’s house. I didn't get sleep after returning home so I started writing about this. So, this was my personal experiences about the trip. I am eagerly waiting for the next yoga retreat and thanks to my yoga family members, at last but not least i thank my brother for making this trip the most cherishing,memorable moment in my life (also for giving me an idea of starting a career in creative photography).